A Different Kind of "Song"

Sore feet keeping me in pain

I must have aged at least ten years

Everybody knows long hours and lack of sleep

I want to find a high ledge and take a leap

Pushy customers who all want to fight

Will not find what they came for tonight

They know The Store is out of every thing

It’s Christmas Eve, the place is like a boxing ring

And every one of them, is gonna bitch and whine

To see how long before I really breakdown and cry

And so I’ve decided to completely zone myself out

Even thought they will all just scream and shout

But I could give two shits,

I think I’m coming down with flu

And Christmas, it’s all because of …you… 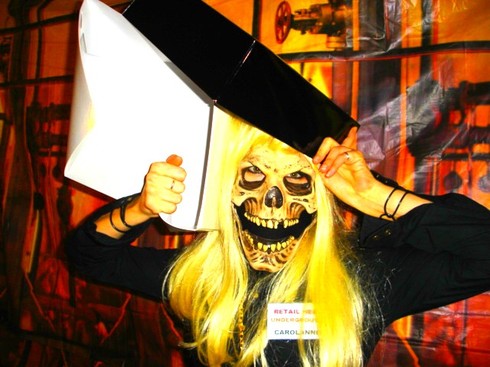 One of the things I hate most about Holiday Retail Hell is the whole obsession with a free fuckin gift box. Why do people need stupid boxes anyway? It's a waste of a tree and a waste of my time. At my Big Fancy Store we actually give away nice boxes. We have to make the goddamn boxes and then wrap the item up nicely in tissue with a fucking sticker and box it for the customer. It's a fucking pain in the ass. What I would give to have someone do the boxmaking for me, but noooooo, the fucking store doesn't want to pay for it. They want me to do it and break my nails and shred my cuticals.  I have nightmares about making boxes. I FUCKING HATE MAKING BOXES! My Store and Department Manager have kept all of us past our shift's end on many occasions, requiring us to make 50 boxes each before we go home. WTF!!!!FUCKIN CRAZY BITCH MANAGERS!

Sometimes I get customers who want extra boxes, and I just want to say, "I am not a fucking Gift Box Depot assholes." You just spent $200 on designer jeans out in the mall, go to fuckin Target and buy a six pack of shirt boxes for $2.99, don't beg me for extra boxes for all your shit because you are too lazy and too cheap to go somewhere and buy boxes. This gets really bad sometimes. The other day I had a lady yell at me,  "I JUST SPENT $5000 IN YOUR STORE, I DEMAND SOME EXTRA BOXES!" Fucking Beverly Hills Bitch. I wanted to beat her snobby Beverly Hills ass with sweater gift box. I told her to go fuck herself, I'm not giving her free boxes.(I didn't use the F word of course). She stormed off in a huff and I wanted to yell after her, "If you want fucking boxes so bad, go in the back, ruin your own goddamn nails, and make them yourself, you fucking douchebag bitch." Then I went and had a cigarete. When I came back, my co-worker told me the snooty skank went and bitched in Customer service and the Retail Droids gave them to her! YOU'RE FUCKING KIDDING ME, RIGHT? I was so pissed!

I also had a customer buy some slippers that were already in a box and he had the nerve to say, "Can I have a box with these?" I stared at him like he was a fucking elephant high on crack. "They are already in a box," I said. "I just want one of the boxes from your store," he replied. Seriously, it was all I could do not to scream, "Go buy some fucking wrapping paper and wrap them yourself lazy douchebag. I'm not your fucking North Pole wraping elf!' 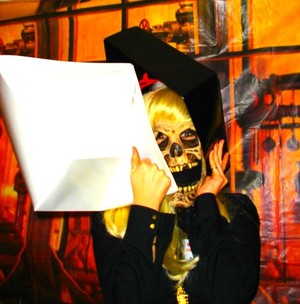 On the other side of Gift Box Retail Hell, I have friends who work at Stores that don't give away gift boxes. The customer annoyance factor for them is just as bad. They are equally screwed. Customers get angry at them because they don't have a fucking free box to give them with their 79 cent pack of Carebear stickers. I told my friend she should just say that there is a walmart up the street and go buy some fucking festive wraping paper and boxes and do it yourself just like the rest of us! Or just stick the shit in a gift bag. Or better yet don't wrap it at all? Do you think my boyfriend really gives a shit his "Call of Duty 2" game is wrapped? Hell no! He just wants to play the motherfucker.

I think we Retail Slaves need to have t-shirts and buttons that say, "BUY YOUR OWN FUCKING GIFT BOXES BITCHES!!! I hate fucking gift boxes. Nothing would make be happier right now than watching a mountain of them fire up and burn like something at Burning Man. Oh, fuck yeah! 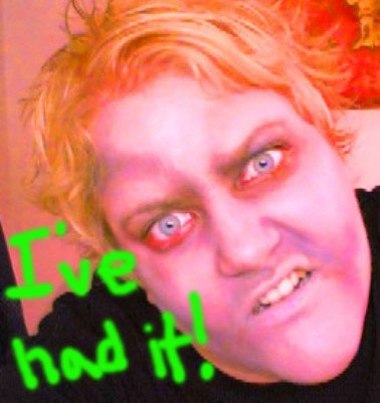 We don't know about the rest of you, but we are in TOTAL FUCKIN HOLIDAY RETAIL HELL right now and Retail Zombie-itis is kick our asses. CUSTOMERS ARE ABSOLUTELY INSANE and DRIVING US CRAZY! Here's what we're pissed about and a few tips on how to deal with the issues.

Psycho Customers on the Phone. They are calling on the phone, asking hundreds of stupid questions, making us describe everything in our stores, and wanting us to basically babysit their asses over the phone. At a Card Store some nut job caller wanted the lowly Retail Slave to pick out five cards and read them to her so she could choose one! At a Big Fancy Department Store a Crazy Lady argued with the Retail Slave about whether or not a shirt came in yellow color. The Slave said it never came in yellow. The Crazy Phone Bitch refused to believe her and would not hang-up.  At a Grocery Store a Customer ragged at a Manager for 20 minutes AFTER he told her he'd refund her for the pumpkin pie she didn't like. How do you deal with this shit? Stay as far away from the fuckin phone as possible. If you are stuck at a counter and have no choice but to answer the phone and you get a Psycho who wants you to be their Mapquest or describe everything, then there is only one course of action you can take: HANG UP ON THEM. That's right disconnect their ass. And If they call back, HANG UP AGAIN. If later on a Manager approaches after the Phone Psycho has complained, blame it on the phone or lie and say they hung up on you!

Impatient Customers. Some customers seem to forget it is THREE FUCKING DAYS before Christmas and it's busier than shit. They don't want to wait. Even for 60 seconds. We've had people start yelling at 61 seconds claiming they have been standing there for a half hour. A raging, impatient customer can make everyone feel uncomfortable and not so merry. Here's how you deal with those assholes: First ignore them. If you are like us you have been infected with Retail Zombie and it's a goddamn miracle you can even work the register at this point. Second, if they decided to wait the 61 seconds for you to help them, DON'T APOLOGIZE!!! You might feel inclined because it's busy and you're by yourself, but this is NOT YOUR FAULT! You are a Retail Zombie doing the best you can. Fuck them. They need to be a little more polite and patient. It's fucking Christmas for chrissake! Third: Picture them hanging upside down naked, covered in molasses, and being dipped in a vat of fire ants.

Customers Asking Stupid Questions. Although customers asking stupid questions is what we call Year Round Retail Hell, three days before Christmas it reaches the kind of out-of-control catastrophic tidal wave that makes us want to flip out and start screaming. We are tempted to say things like, "I can see you aren't smarter than a fifth grader," or "Are you related to Brittney Spears?," or "You have to be the dumbest idiot I have ever encountered. What hole did you just crawl out of?" It's probably best if you don't say these things. Your Retail Hell Day will only get worse with a complaint and write up from a Manager. The way to deal with Stupid Customers during Holiday Retail Hell is to play with them. Sort of like a cat plays with a grasshopper before it eats it. You can use the awesome Retail Hell tool we like to call Secret Sarcasm - where you answer their stupid fucking questions using phrases and voice inflections that amuse you, but they have no clue what you're up to. If you've answered their initial stupid question and they continue to be stupid, you can do one of two things depending on your state of Retail Zombie mind: 1) Brush them off by pointing where they need to go or simply say, "I'm sorry I don't know, or we don't have that." 2). Become that cat and play with them like they are fresh catnip, egging on their delirious stupidity. It's great fun, you'll be laughing your ass off inside and will have a great Retail Hell story for later on!

Good luck Slaves! Hang in there, it's almost over.

The Virus Is Spreading... 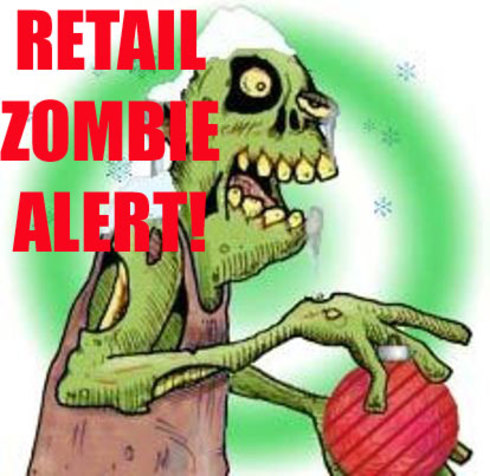 Retail Zombie is starting to take its toll...the 92 hours of working, doing the same thing over and over, getting home late, getting up early, ringing the registers, making boxes, repeating ourselves to customers who aren't listening, getting yelled out by customers over stupid shit...our eyes are glazing over, the brain is fogging up, and the limbs are moving like cardboard....this first image is a poor Retail Slave from a Home Store...CLICK HERE.

We wish this video could be played in malls and stores all across America. Wake those customers up! Miss Divine Stalls makes all kinds of cool videos, including one where she wants viewers to help her choose a charity that she will donate too. Way to go girl! Subscribe to Miss Divine Stalls...CLICK HERE. 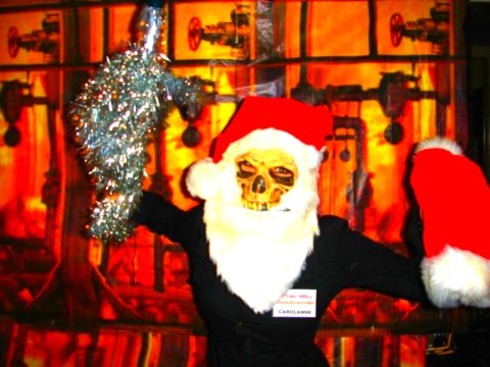 We drank beer, ate awesome italian pizza, and bitched about Retail Hell. Absolutely no fucking Christmas music was played. Oh and we took a few pics. See what Retail Hell Underground Santa does to Jason in our Myspace slide show....CLICK HERE