I've been pretty much a Drive Thru Slave for about 13 years now.

Right now I'm the night manager at Taco Bell/Long John Silver's. Situated in the nook of a rather ridiculous 3-way intersection, I am blessed with pretty low volume work.

I spent most of Black Friday night thanking the retail/customer service gods for making drive thru completely utterly dead. There's a Walmart less than quarter mile away and the streets are packed... And I have one customer. My heart goes out to all the retail slaves getting spat on for their ten dollar tv coupons! The worst I had (before the paragraph to follow) was an entitled woman who thought she would like to prepay her tacos, shop, then come eat them. I told her she better hope I remember her......

Sooooo its 20 minutes to closing time, I've had maybe 5 orders in the last hour.... and I knew I wouldn't get away with no problems today... 10 mins to close this guy wants 50 of EACH hot sauce with his 2 bean burritos.

I said "No our policy is one per two items ordered but I'll give you this (giant handful of packets, prolly 20)".

He goes "C'mon baby you can do better than that."

I just growl and walk away to get his burritos.

I ask one of my two crew members to hand them to him because I'm going to yell at him when he asks for even more sauce.

She returns a moment later saying '"You gotta come talk to these guys..."

So as I return I'm psyching myself up for an argument. Just as I reach for the window latch, the guy gets out of his truck and punches the window, twice, hard! 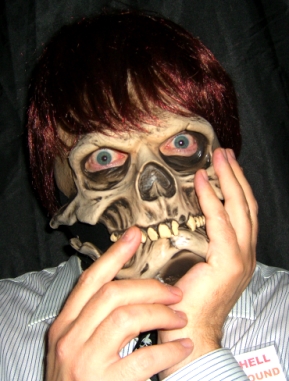 I recoil and suddenly realize no way am I opening the window now!

I scream, "Did you just punch my window?! I'm calling the police!"

He levels a finger at me with a death stare.

I grin and stick my finger on the window like I'm E.T. and start giggling.

His face squeezes up with rage and he takes off....

I think I freaked my crew out... One girl was all "I never seen you get mad like that..."

And I thought about it and regained my composure and said to her, "If that's the worst thing that happened to us on Black Friday I'm pretty damn good with that." 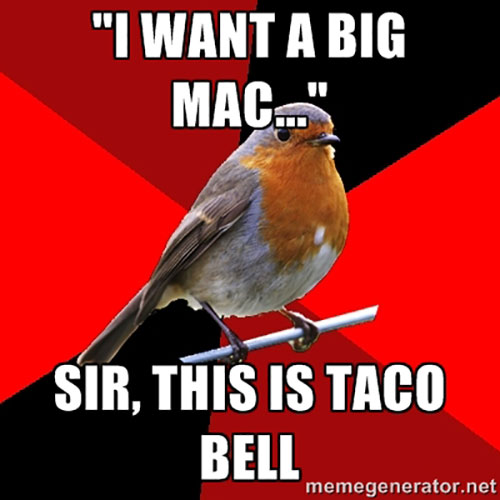 Customer: And a Mc Flurry.

Customer: So what's my total?

Retail Slave: As I've been telling you, you're at Taco Bell. We don't serve those items!

Customer: WELL WHY DIDN'T YOU SAY SO?! WHAT A FUCKING WASTE OF TIME! *screech of tires*

Retail Slave: Somebody needs to pour me a stiff one... From TinyPotatoAttack: Are you one of those garbage people who texts during a movie at the theater? Apply for a job at Taco Bell today! 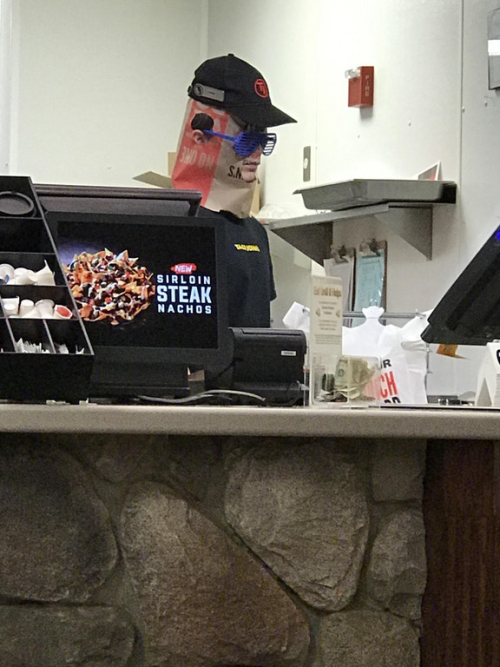 From geezlouweez: This was the guy who took my order at A Taco John’s.

Customer Service Comebacks: Do You Seriously Not Understand That Businesses Sometimes Run Out Of Things? 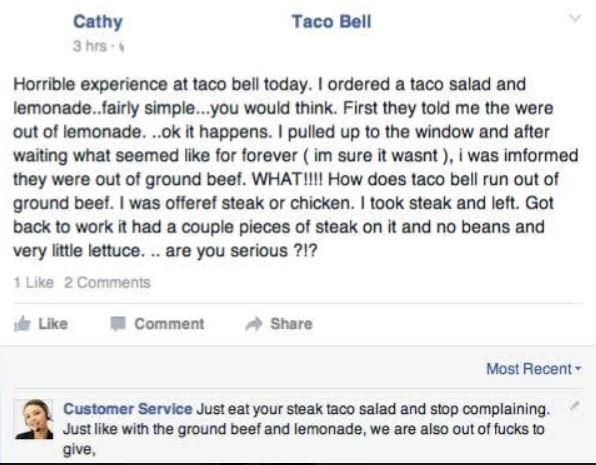 Spelling is Hard at This Taco Bell 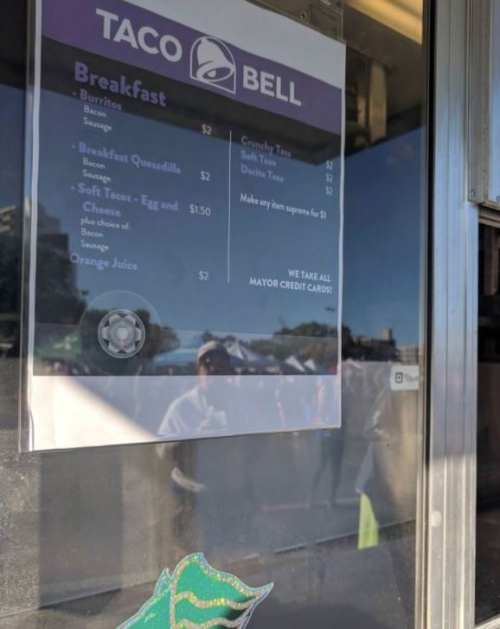 From findingnewglory: How do you expect the mayor to pay for his tacos?!