Twitter user @Saeya8 originally posted this video on Twitter with this caption about her teacher's surprise birthday party:

Threw our teacher a surprise party. He doesn't remember the last time he has a bday cake

According to the Daily Mail, this teacher is Kyle Simpler of Burleson High School in Texas.  He revealed that it's been about 10 years since he's had a real birthday cake. 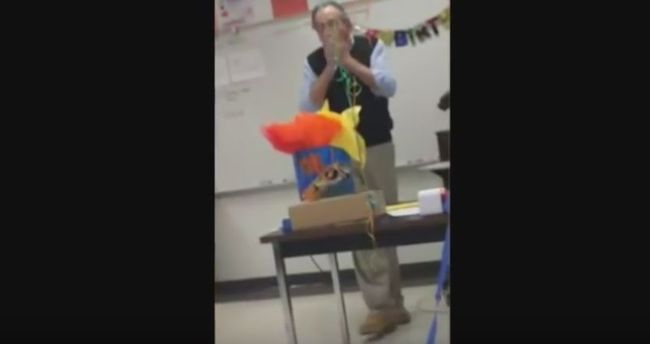 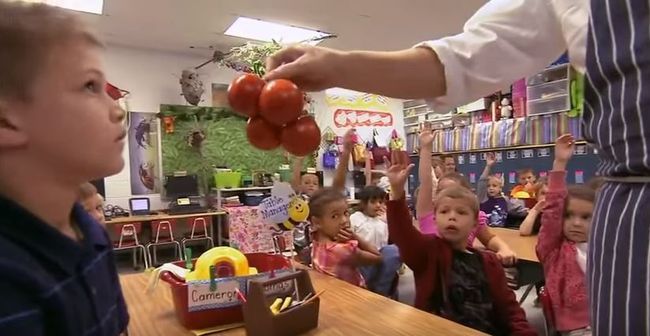 Every kids wishes for a blizzard in hopes that school will be cancelled. What most kids don’t realize is that teachers feel the exact same! Just in time for the historic blizzard which is about to pummel the mid-Atlantic east coast of America, Tennessee third grade teacher Mary Morris made this hilarious snow day parody of Adele’s hit single Hello. 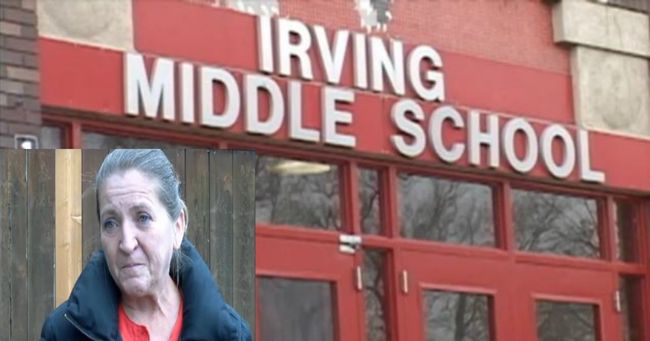 It's a good thing the school isn't owned by Walmart. This story would have a very different ending...

A lunch lady fired for handing giving a free meal to a hungry child who couldn't afford to eat has been given her job back after public outcry.

More than 80,000 people signed a petition demanding that Dalene Bowden was rehired after she was terminated from Pocatello/Chubbuck School District in Idaho on Tuesday for 'stealing'. A Gofundme page was also created raising over $19,000.

The Irving Middle School lunch lady admitted she broke the rules when she gave the hungry 12-year-old girl the free meal when she saw the student did not have enough money to pay.

'I know I screwed up, but what are you supposed to do when the kid tells you that they're hungry and they don't have any money,' former Irving Middle School lunch lady Dalene Bowden told the Idaho Statesman.

Now, after mounting public support for Bowden, it appears that Pocatello/Chubbuck School District has bowed to pressure and agreed to rehire the lunch lady, NY Daily News reports.

But Bowden, of Pocatello, Idaho, said she would think twice about returning to her former role.

'I have to think about it,' she told NY Daily News. 'I'm afraid that they would just make my life miserable and then try to set me up, or get rid of me some other way.'

She also warned that she would be willing to break the rules again if the district doesn't change its policy.

The cafeteria worker, who says she's a breast cancer survivor, said that even before the incident she was often seen as the 'cool' approachable lunch lady.

'That's probably why the girl came to me when she didn't have any money,' she said. 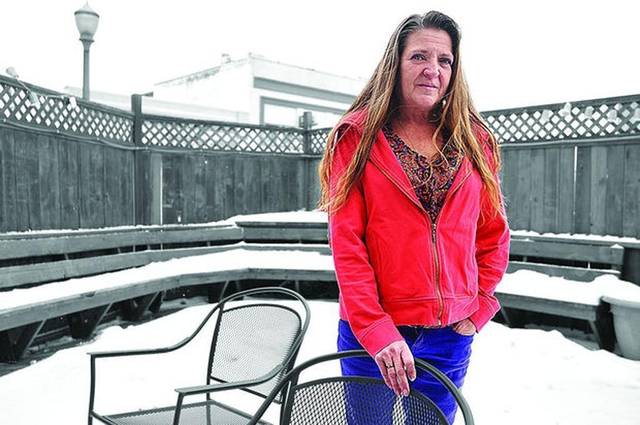 Bowden admits she'd already received a warning about her generous nature - she'd once given a kid a free cookie.

She said that when she first got in trouble, she offered to pay the $1.70 lunch cost, but school officials refused.

Bowden received a termination letter from the school district soon after which informed her she was being fired for 'theft-stealing school district or another's property and inaccurate transactions when ordering, receiving, and serving food'.

The cafeteria worker, who had worked for the district for three years, said the letter was 'breaking my heart', and added that the school didn't even include her final check.

'I'm not apologizing and I would do exactly the same thing again regardless of the consequences,' Bowden wrote on a GoFundMe page to raise money for a lawyer to fight the ruling. 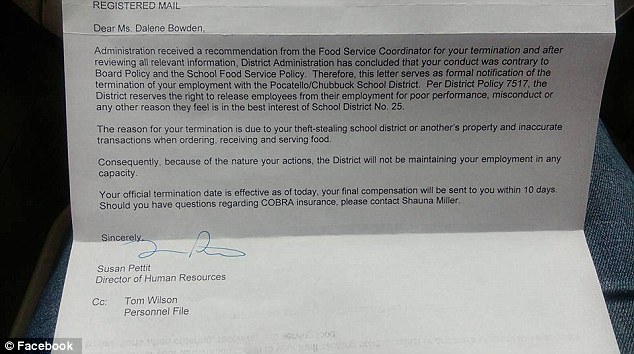 'I love my job. I really do. This just breaks my heart, and I was in the wrong, but what do you do when the kid tells you that they're hungry, and they don't have any money? I handed her the tray.'

'I got fired for having a heart.'

Bowden added that when students are over their lunch overdraft limit of $11, staff were supposed to take their trays away and dump out the food - in front of everyone.

District 25 spokeswoman Shelley Allen disputed her claims however and said students who cannot afford to eat are given something 'privately and discreetly'.

Since the story broke earlier this week, tens of thousands of people have signed up to an online petition, started by Raushelle Guzman, of Pocatello, who has two children in the same school district, to demand that the school reinstate Bowden.

By Thursday, the petition had already reached more than 80,000 signatures while support continued to grow.

'I think [Bowden] did the right thing and I think we need to make sure that every child that wants lunch can have lunch,' Guzman told the Idaho Statesman.

'I think the district's policy needs to be changed. We do not need to humiliate or demean any child or worker in that situation.'

Many commentators on the page criticize the school and the district for their decision to sack the kind-hearted lunch lady.

Jamie Beel, of Pittsburgh, said: 'This is ridiculous, we can give ppl who aren't citizens everything they want... but can't give a 12 year old a $1.70 lunch at school??

'This lady is to be commended, respected and re-employed for having such a huge heart. She truly cares for the kids!' 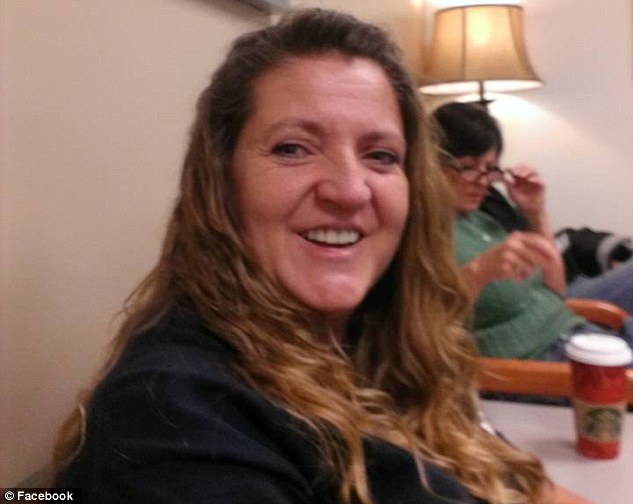 Dorothy Plum, of Casper,Wyoming, added: 'The school in question needs to go back and review what they are teaching 'their kids' about compassion and take the same lessons into their lives.'

'There really are a lot of really good people out there,' Bowden told the Idaho Statesman. 'I know that and I am just overwhelmed by the response.'

A Go Fund Me page to raise money for a lawyer to fight the termination had raised almost $20,000.

The school district have now released a statement confirming they are offering Bowden an opportunity to return to work.

A spokesman said: 'During this holiday season, emotions and feelings abound in the spirit of giving and looking after the needs of others.

'Our District focuses on the success of every student and recognizes nutrition is an important part of each student's education and learning.'

'The District has been in communication with Ms. Bowden extending an opportunity for her to return to employment with the District.'

The district, in Wednesday night's press release, stated that it 'does not and has not ever taken negative employment action against any food service worker due to a singular event of this nature.'

via The Daily Mail 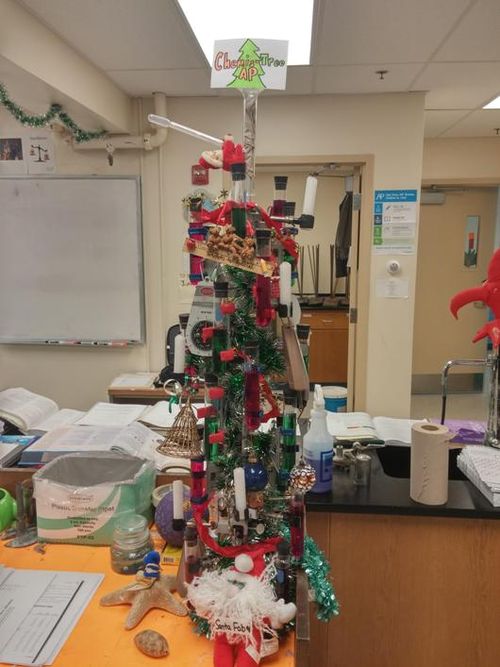 From StaTicDrDeath: My school wouldn't allow teachers to put up a Christmas tree in their classrooms. So our chemistry teacher improvised and made a Chemistree instead.

Inspiring: Florida Teacher Chris Ulmer Starts Each Day Complimenting Students One by One 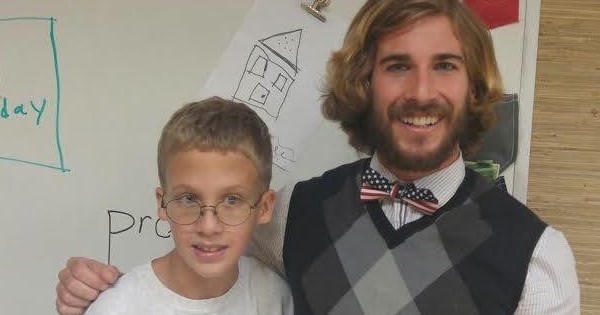 Before any work starts, Ulmer calls each child up to the front of the classroom and compliments them.

"I love having you in my class. I think you're very funny. You're a great soccer player. Everyone in here loves you," he says at the start of a video posted on Facebook, which has gotten over 20 million views.

Ulmer runs a Facebook page for his class (with parent's permission) and has been trying to get a book published about his students.

Ulmer's Facebook page, Special Books by Special Kids, was created because he has been trying, unsuccessfully, to get a book published about the kids. "I have 50 rejection letters on my fridge to keep me motivated," he said. The book focuses on the story of each of the kids in his classroom and is collaboratively told by the child, his or her parents, and from Ulmer's perspective as their teacher.

He's had the same kids in his class for three years and said that they've "evolved as a family. We have an understanding that comes with time that you don't naturally have."