A Call from Mark the Crazy Telemarketer From Hell

I think Mark had too much to drink during lunch. Grocery giant Woolworths has scrambled to cancel over $1 million worth of shopping vouchers after a massive leak of customer data, in which it mistakenly emailed the redeemable codes of 8000 gift cards containing the customers' names and email addresses.

Fairfax Media has obtained a copy of the email which contained an excel spreadsheet with the names and email address of thousands of customers and a downloadable link to 7,941 vouchers, worth a total of $1,308,505. It is understood the spreadsheet was emailed to more than 1000 people, all of whom could access the gift card codes and immediately begin shopping.

As a result of the data leak, customers reported they had logged onto the Woolworths site on Saturday only to discover their vouchers had already been spent.

The data breach, which was discovered on Saturday morning, occured after customers purchased the vouchers from the online savings site Groupon, which ran a deal last week offering BIG W eGift cards, valued at $200 and $100, at a 7.5 per cent discount. The cards were redeemable at Woolworths online and in store, Big W stores, and Caltex petrol stations.

Once customers had paid for the vouchers via the Groupon site they were advised they would receive an email from Woolworths' Everyday Gift Cards containing a PDF attachment with the electronic voucher.

But when some customers proceeded to open the attachment they discovered the excel spreadsheet containing the links to over $1 million worth of vouchers.

Luke, a 36-year-old from Perth, WA, said he decided to check the balance on his 10 giftcards, worth $1900, on the Woolworths website after he realized other customers had probably been emailed the same excel spreadsheet with the links to his vouchers.

"One of my gift cards had be used for online shopping already. Another one had been used in store at Woolworths Parramatta," the father-of-two told Fairfax Media.

"Hopefully my email address doesn't end up somewhere where it permanently gets lots of spam." 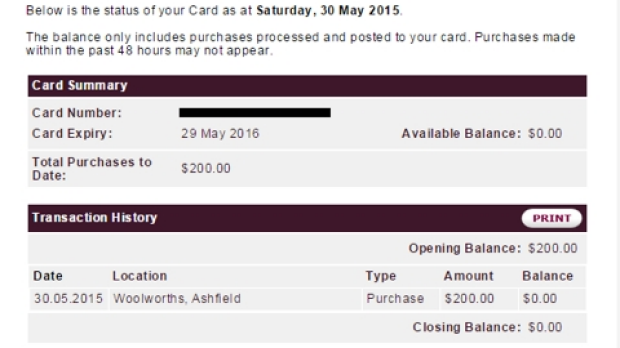 Another customer, Jason Wang, said three of his $200 vouchers had been spent at a Woolworths in Ashfield in Sydney's inner west, about 300km from his home in Canberra.

On Saturday evening, affected customers received an email from Woolworths advising them the gift cards had been cancelled.

But this, too, caused at least one customer further distress.

Mr James, who did not want to disclose his first name, said he "was embarrassed in front of a large number of people" after he attempted to buy his weekly groceries using his gift cards in a Woolworths store on Saturday, only to be told by staff he was using stolen cards.

"They took my money from my credit card and told me I was using stolen cards. I could not take the trolley of groceries home as I did not have enough money to pay.

"I tried to call Woolworths but no one picked up the phone.

"I have had a very very horrible day."

When contacted by Fairfax Media, Woolworths refused to provide any detail on how the data breach occured or the number of customers affected. Instead, they issued a two-line statement.

"Woolworths takes the concerns of its customers and data security seriously," the statement read.

"We experienced a technical fault with an e-voucher offered to customers this week. We are working to resolve the issue and are assisting customers." 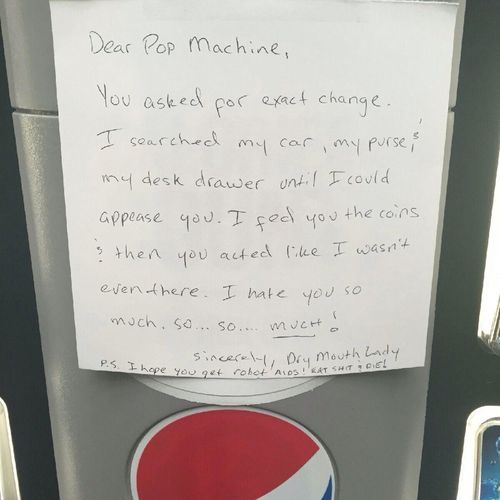 From Lidstrom_5: This was found at the vending machine at my dad's job.

A 21-year-old Vermont woman paid a visit to the hospital after she was bitten by a black widow spider.

After visiting Shaw's in Colchester, the woman apparently went home with the creepy crawler in her bag of grapes.

Her mother said when she reached into the bag of produce, the spider crawled up her arm and bit her. She said they then caught the spider and took it and her daughter to the hospital. A nurse confirmed to WPTZ that it was in fact a black widow. 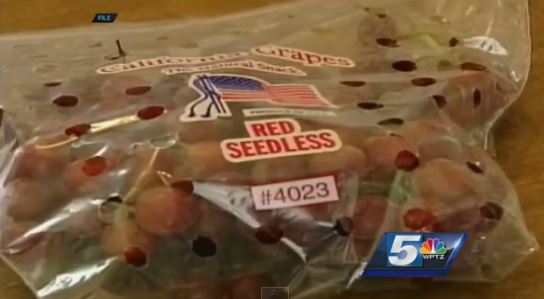 Brian Dowling from Shaw's Public Affairs office issued this statement regarding the incident:

The health and safety of products we sell, and our customers, is our first concern. We have been closely monitoring the situation and been in contact with the family. We replaced product in the customer's refrigerator as a precaution and took immediate action to inspect the product at the customer's store. We also are inspecting the product in all of our stores and have been in touch with the supplier, which has an extensive food safety management system in place. 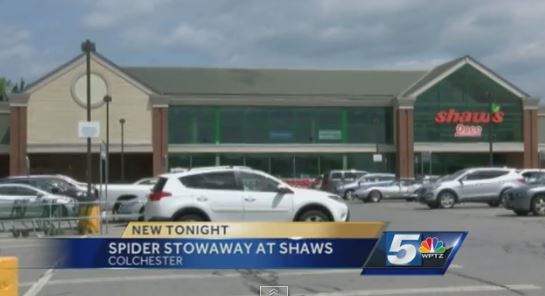 The Northern New England Poison Center said the bite from a black widow feels like the prick of a pin.

According to experts, depending on how much venom gets into the bloodstream, patients might suffer some muscle pain.

"You'll go into the emergency room, they'll monitor you for blood pressure, heart rate and pain obviously and then they'll treat for the pain with either pain medications or a muscle relaxant, and then they'll look to see if the pains get worse and the symptoms get worse," Gayle Finkelstein said. "If it's a severe case they would require anti-venom."

Although rare, this isn't the first time a black widow spider has been an uninvited guest in a Vermont home. A shopper at the Shaw's in Williston brought one home in 2004.

Biologists at the University of Vermont said the spider, with its distinct red hourglass mark on the belly, is much more common in the South.

"They're often very highly associated with humans," Ingi Agnarsson said. "There are areas that have black widows very commonly inside houses. Just goes to tell you that they are often common inside of houses but they very rarely bite."

Health officials say people bitten by black widows are usually back to normal after three or four days.

NEW ORLEANS (WGNO) – A waiter at a popular French Quarter restaurant has been fired after adding a racial slur to a customer’s receipt. The Huck Finn’s Cafe receipt has gone viral and sparked outrage on social media.

It shows a list of food ordered, but below the ‘thin catfish platter’ is the n-word along with the phrase ‘100% dislike.’ One of the three women who were at the table says she is horrified.

“There’s no reason why I should ever be considered a (expletive) ever. That is so disrespectful. That is so demeaning. It doesn’t matter what I do, what I say, how I dress, how I act, how I speak, how educated or how uneducated I am,”  Angel Alexander said at a press conference Friday with an attorney and the NAACP. “Why is it, that it always has to go straight to that?”

Alexander, Alyson Facilis, and Liryca Neville Branch the daughter of local music legend Cyrille Neville say they went to Huck Finn’s Thursday on their lunch break. But Alexander says some food was sent back because they weren’t satisfied.

“The waiter never apologized.  He actually had a justification for it,” said Alyson Facilis. 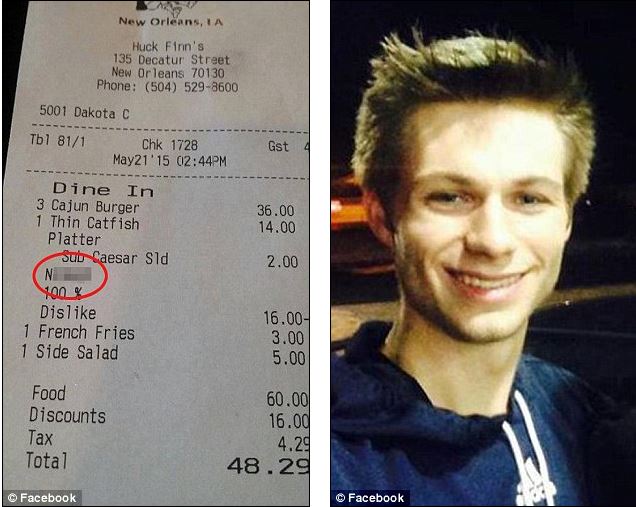 The women say their waiter is the son of the restaurant’s general manager, and he wasn’t immediately fired like the restaurant claims because they went back later and saw him still working.

The women’s attorney Morris Reed Jr. says they want a sincere apology from the waiter and the restaurant.

“This was done intentionally. This is something that the waiter who gave them this receipt wanted them to see and we were just appalled. She felt very disrespected,” he said.

Today, Huck Finn¹s Café recognizes that the action taken by an employee Thursday afternoon has caused a great deal of outrage and heartache among many in our community and on social media. We acknowledge that the anger and disappointment being expressed is legitimate and has serious merit. We want everyone to know that we agree. The employee¹s behavior was offensive and completely unacceptable.

Ownership stands by the decision of the restaurant’s general manager to immediately and unilaterally fire the employee for his deplorable behavior. It was the right decision and his termination is consistent with company policy. Moreover, Huck Finn’s Café is committed to reviewing all of our systems to further prevent anything of this nature from ever happening again.

Finally, we sincerely hope that the ignorant action of one employee is not considered a reflection of the entire staff at Huck Finn’s Café. His behavior and language simply do not fit our belief system. All of our customers should be treated with love, dignity and respect, and we will not tolerate anything less. We humbly apologize to our customers and our community for this deeply regrettable incident. We share your heartache and outrage and would welcome an opportunity to deliver a personal apology to the individuals involved in the incident. 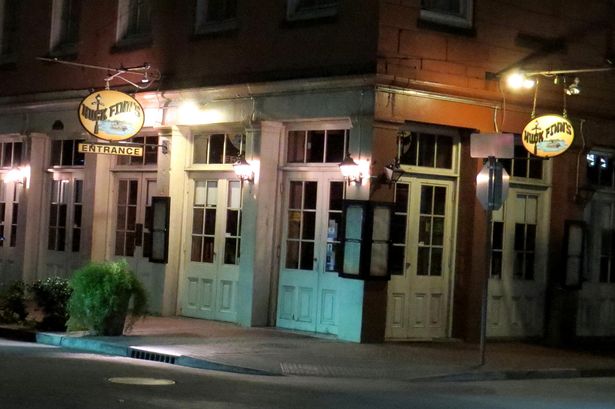 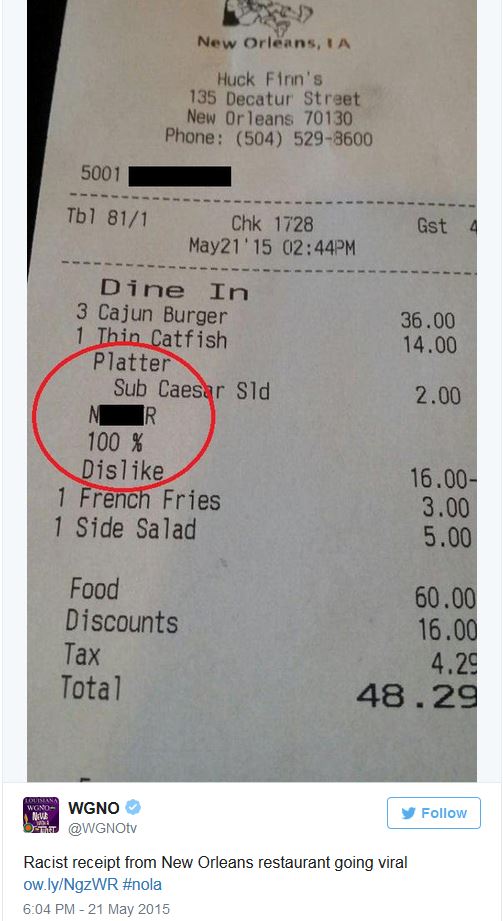 A restaurant in New Orleans says it’s “shocked and appalled” after a receipt from the establishment bearing a racial slur began circulating on social media.

An image of the itemized receipt from Huck Finn’s Cafe, dated May 21, shows the words “n----r 100% dislike” typed beneath an order for a Thin Catfish Platter. It was uploaded to Facebook on Thursday by a woman who claims her daughter was one of the individuals given the receipt.

A woman told WWLTV.com that she had been at the restaurant for lunch with three co-workers when they received the receipt. She said the server who was responsible for the slur was not fired “on the spot.”

Huck Finn's Cafe insists that it did terminate the server. The restaurant posted a statement on its website Thursday night apologizing for the server’s actions.

Huck Finn's Cafe is shocked and appalled at the actions of one of its employees, who was terminated immediately after management found out they violated company policy. Huck Finn's Cafe is committed to treating everyone, employees and customers alike, with dignity and respect. The unfortunate actions of this one employee do not mirror the mission of Huck Finn's Cafe's firm non-discrimination policy, and we are extremely apologetic for any inconvenience this may have caused.

The restaurant added on Twitter that it is “working around the clock to rectify the situation.” When reached for comment, Huck Finn's told The Times-Picayune that "the business had no further comment."